I was trying to post this from my phone, but I swear I thought the word “blasé” had two s’s. Anyway, the post isn’t about the word but without the word, the post doesn’t have any chance at a meaning.  It’s just a picture of a lizard.

I was walking my parent’s dog, Cassie, the other day and saw the smallest lizard I have ever seen. Just a tiny little thing, but I was amazed that I had made it 43 years without seeing a baby lizard. I’d seen ones I thought were babies, but this thing was amazing. I took several quick photos trying to capture it before it hid from me. I texted the photo to some people to show what a small lizard I had just seen. I do not know if I can convey just how cool an occurrence this was for me.

Then we walked some more. Another lizard at another house. Then the next block over, another lizard. Then another and another. A new block, a new baby lizard. By the time we finished our walk I was actually quite blasé about baby lizards. It’s amazing how such a strong feeling can grow stale very quickly.

There are always things in life that catch you immediately and then almost as quickly they are gone. Think of all the one hit wonders out there trying to capture the success of that one song or all the directors that capture you once and then all their subsequent films leave you cold, the authors who write on great novel and then you couldn’t care less about anything else in their canon.

Maybe Willis Alan Ramsey had it right when he only released one album. It’s a great album. Its’ the only one he did. People say “When are you going to record another album?” and he replies, “What’s wrong with the one I got?” 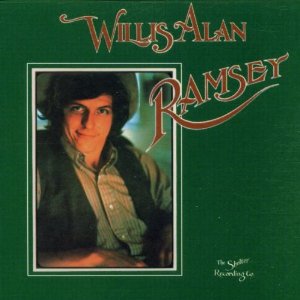 If you’ve never heard the album, you should. It’s solid all the way through with some stellar tracks. The Ballad of Spider John is genius. Satin Sheets is my ringtone when anyone I don’t know calls me. Anyway, the song list is not what I want to dwell on. I want you look at that album cover.  LOOK AT IT! That is a man who had it all figured out.